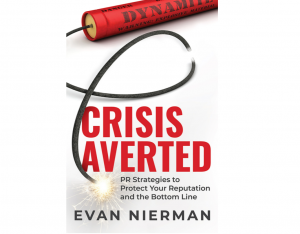 Crisis Averted: PR Strategies to Protect Your Reputation and the Bottom Line, by Evan Nierman, provides deep insights and practical advice for anyone who needs crisis public relations. And, who might that be? Well, everyone, according to Nierman. He’s right, of course. Every business, and certainly every famous person, will have a public crisis that threatens to ruin their reputation. Nierman’s career has been devoted to averting such media meltdowns. (Disclosure: Nierman is married to my cousin, but in the spirit of getting my side of the story out early, I wanted to state for the record that I really like this book anyway.)

The book is a fast read. It’s well-written and compelling. Nierman uses many real life case studies to illustrates his various points. He talks about the restaurant with roaches that gets ambushed by the local news, the school that’s on the verge of being defamed by a major newspaper, CEOs caught (literally) with their pants down, and on and on. It’s fun to read, partly for the very reason Nierman says that such stories make for great copy: Schadenfreude. You want to see the millionaire CEO get what he deserves—except, as Nierman notes, the sensational stories that get out in the news are often not true or highly distorted.

As a crisis PR advisor, Nierman’s job is to mitigate the damage. In contrast to a regular PR person, whose mission is to get the client into the news, Nierman’s mandate is often to keep the client out of the news. This is not always easy, but the book highlights how it is possible to negotiate with reporters and establish parameters of what will be fair to report and what would not. It’s not easy, and it’s extremely clear from the book that only an experienced crisis PR person will have what it takes to get the job done. As he comments, many PR firms say they do crisis work, but not all are truly qualified.

One of Nierman’s main points is that it pays to be prepared. Waiting until a crisis is unfolding is not a good time to start shopping around for a crisis PR firm. Instead, ideally, such a firm will already be on retainer. And, that firm will have worked out what sort of crisis might erupt. This is not magic. A construction company, for example, is likely to have a crisis around worker injuries, safety practices of construction defects. Nierman’s firm, and those like them, can prepare press release, talking points, media training and so forth to get key stakeholders ready to respond.

Then, timing is critical as the crisis comes to life. Nierman explains how his team puts a plan in place and executes a careful media messaging strategy with a designated spokesperson. The main weapon? The truth… Yes, despite the “spin doctor” reputation held by some firms, the truth can make a bad story manageable. He suggests, if the news is bad, get it out. Own it and explain how the problem will be solved. This enables the client to control the narrative. This is crucial, as the media will define the narrative if no one else does.

The book also describes a fascinating dynamic between lawyers and PR people. Litigation PR is a close relative to crisis PR, but often times, a company’s counsel will advise their client to say nothing in the media. This may be a good approach, but it can lead to a situation where a company’s reputation gets damaged badly as they wait, sometimes for years, for their day in court.

In discussing this issue, Nierman points out how the PR game has changed in recent years. The Internet has made communication so instant that bad stories can get out in minutes and stay on the Web forever. Yet, at the same time, the audience’s attention span is so short that even the slightest whiff of a story being old news can effectively kill it. This is the subtle zone where the crisis PR person operates.