How to Write a Press Release for a Book

The structure of a book press release 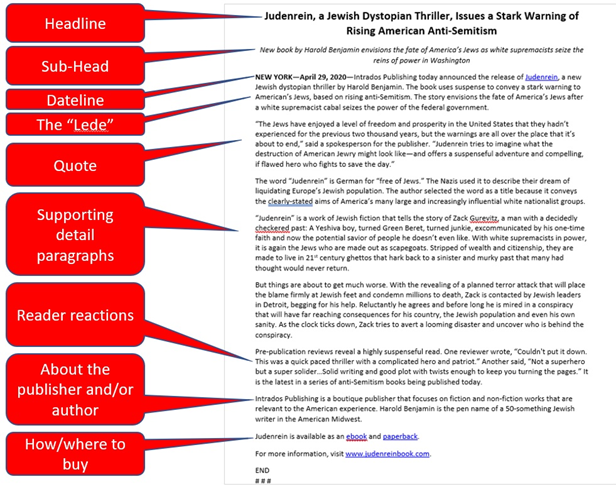 Example of a Book Press Release

The following is an example of a book press release we wrote earlier this year. You can use it as a template. Or, download our press release template in Microsoft Word.

NEW YORK—April 29, 2020—Intrados Publishing today announced the release of Judenrein, a new Jewish dystopian thriller by Harold Benjamin. The book uses suspense to convey a stark warning to American’s Jews, based on rising anti-Semitism. The story envisions the fate of America’s Jews after a white supremacist cabal seizes the power of the federal government.

“The Jews have enjoyed a level of freedom and prosperity in the United States that they hadn’t experienced for the previous two thousand years, but the warnings are all over the place that it’s about to end,” said a spokesperson for the publisher. “Judenrein tries to imagine what the destruction of American Jewry might look like—and offers a suspenseful adventure and compelling, if flawed hero who fights to save the day.”

The word “Judenrein” is German for “free of Jews.” The Nazis used it to describe their dream of liquidating Europe’s Jewish population. The author selected the word as a title because it conveys the clearly-stated aims of America’s many large and increasingly influential white nationalist groups.

“Judenrein” is a work of Jewish fiction that tells the story of Zack Gurevitz, a man with a decidedly checkered past: A Yeshiva boy, turned Green Beret, turned junkie, excommunicated by his one-time faith and now the potential savior of people he doesn’t even like. With white supremacists in power, it is again the Jews who are made out as scapegoats. Stripped of wealth and citizenship, they are made to live in 21st century ghettos that hark back to a sinister and murky past that many had thought would never return.

But things are about to get much worse. With the revealing of a planned terror attack that will place the blame firmly at Jewish feet and condemn millions to death, Zack is contacted by Jewish leaders in Detroit, begging for his help. Reluctantly he agrees and before long he is mired in a conspiracy that will have far reaching consequences for his country, the Jewish population and even his own sanity. As the clock ticks down, Zack tries to avert a looming disaster and uncover who is behind the conspiracy.

Pre-publication reviews reveal a highly suspenseful read. One reviewer wrote, “Couldn’t put it down. This was a quick paced thriller with a complicated hero and patriot.” Another said, “Not a superhero but a super solider…Solid writing and good plot with twists enough to keep you turning the pages.” It is the latest in a series of anti-Semitism books being published today.

Intrados Publishing is a boutique publisher that focuses on fiction and non-fiction works that are relevant to the American experience. Harold Benjamin is the pen name of a 50-something Jewish writer in the American Midwest.

Judenrein is available as an ebook and paperback.